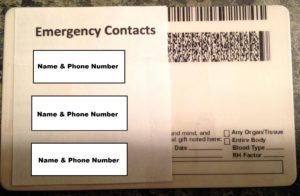 I suppose that this blog could be viewed as a “Public Service Announcement”.  I recently had an eye-opening experience that cause me to think of something that had escaped my previous awareness.

Someone, with whom I am very close, had discovered suddenly that he couldn’t breathe. He drove himself, at 100 mph, to the nearest hospital. He pulled so close to the Emergency Room door that he came dangerously close to altering it into a drive-thru. My loved one then passed out in the parking lot. Medical professionals were quick to respond. Unfortunately, they had no identity for him.  They assigned him a “John Doe” name, pending proper identification.

It wasn’t until a hospital security officer went to move his vehicle, that his wallet was discovered. They learned his name. His wallet, cellphone, and car keys were gathered and locked in the security office for safekeeping. The hospital had no contacts for him. In his desperation to seek help, he notified no one prior to rushing in to the hospital. This was a Sunday afternoon at about 4:30 p.m.

It was upon this dear one’s prompting that I was taking a concealed weapons course that day. I texted him shortly after 5 p.m. to tell him my status, and proudly offered a photo of my well-wounded target. He didn’t respond. “Okay, he’s busy. He’ll get back with me when he can,” I thought. By evening, he hadn’t reached out to me. I expected him to have questions regarding my thoughts on the course.

Monday morning, I went to work. All day my loved one was silent. After work, I drove past his house and saw that his vehicle missing. I know him to often help his friend with his business. “He must have gone from one job to the other.” It’s after 6 p.m. and they should be wrapping it up. Shortly after 8 p.m., I called and left a message: “I know you’ll think I’m a ‘nervous Nellie,’ but it’s out of character for you to go so long without responding to me. Just give me a call or shoot me a text to let me know you’re okay.”

I typically turn off my cellphone’s ring when I go to bed, but I left it on that night. At 3:30 a.m. on Tuesday morning, God woke me bolt right. “Call hospitals!” I fought with the idea, thinking that my friend would view me as over-the-top. The Holy Spirit spoke to my reasoning. “You know him. If he hasn’t contacted you by now, it’s because he can’t.”

I reached for my phone and Google searched all the area hospitals. The first call on the list confirmed that he was indeed in their Critical Care Unit. I was connected to his nurse, Don. I’m not family, so Don could tell me nothing more than he was there. I immediately raced over.

When I arrived, I had to wait because the nurses were bathing him. I know it didn’t take more than 30 minutes, but to me it was the longest wait ever. I had no idea the state he was in. The not knowing was agonizing. I was escorted to see him by Don. In room 115, I discovered one of the strongest men I know breathing by ventilator. Don explained that they didn’t know who he was and they don’t check past hospital records assuming who is currently valid to call. I thought perhaps that his mother knew and chose not to tell me of his condition. His mother and I have always gotten along, so that seemed strange to me. I said to Don, “I know that you can’t tell me anything, but could you tell me if he’s in a coma?” “No,” he said, “He’s just sedated. We can wake him up to a certain point. He responds to questions. It’s just best to keep him relaxed with all the tubes. Maybe you should call his family.” I didn’t want to bother his family, but I wasn’t going to find out his condition from the hospital staff. I know his mother to be an early riser, but I waited until 5:45 a.m. to call her. It was then that I discovered that she too had been looking for him since the day before. She was incredibly grateful that I had found him. She came to the hospital immediately.

I happy to say that the pneumonia from which my dear one suffered is now cleared and his is in good health. I’m telling you this because he was in critical condition from Sunday until Tuesday morning before anyone knew. Gone are the days where people carry phone numbers on their person. With the invention of the cellphone, most don’t know the numbers of family members at all. Let’s say that medical personnel do open your cellphone. Just because you have a phone number labeled “Mom” doesn’t mean that’s who you’d want them to call. What if you don’t have a good relationship with “Mom”? What if “Mom” is in poor health and a call such as that could push her over the edge? No, they aren’t going to risk it. HIPAA laws prevent them from making assumptions on who to call, so they contact no one if you’re unable to tell them exactly who to contact.

I understand that “Emergency Contacts” can be placed in a specific location within cellphones. But let’s be logical here.  Do you really expect a hospital staff person to know how to retrieve that information from every make and model of cellphone? I can tell you now, that even if they do know, they aren’t about to take the time to do so. Time aside, accessing a cellphone could very likely be viewed as an invasion of privacy (HIPAA violation). Also, in the event of an accident, cellphones are often lost or broken. For example, my cellphone is never on my person when I’m in the car. It’s in the cupholder, in the console, or on the passenger seat.

Here’s my “Old School” suggestion. The one thing that is always on us is our ID. We tend to carry it in a wallet or card holder. It can be reasonably found in a pocket or purse. I suggest that you gather three names and phone numbers. Print them on a small piece of paper and tape them to the back of your ID. I look at it this way, they have to see those numbers before they can tell if I’m an organ donor. This is the best way to ensure that the people you want informed would be contacted. And one last thing: give your work contact numbers to the people on your “Emergency Contacts” list. It’s not enough that they know what company you work for. Give them the name and number of the person you would call in the event you can’t make it in to work.

This is such a simple thing to do to prevent your loved ones from the horror of not finding you. I pray that I never go through an experience such as that again. And I will never put a loved one of mine through that if it’s at all preventable. Well, it is preventable. All it takes is a few minutes and a small piece of paper.