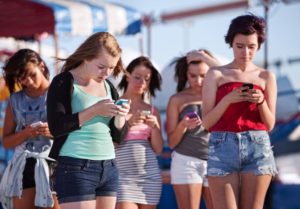 With the holiday shopping season upon us, I’m sad to say that I expect to see more of them; The Disengaged.  In the last two weeks I noticed as I suffered the *unfortunance of stopping at various stores for groceries and other necessities.  I’ve often touted myself as a “husband’s dream” because I absolutely loath shopping.  I have nothing against women who find a day at the mall a good time, but I personally would rather spend my spare moments on things that I find more productive than spending money.  A day at the mall with a family member or friend is not what I’m talking about here.  I’m talking about the people, such as myself, who are running errands by themselves; only some aren't by themselves.  They're on their cellphones.

I noticed, on my way into a grocery store, that every single person (old and young), entering the store from the parking lot, was conducting a personal phone call; paying little, or no, attention to moving vehicles as they shouted into their handheld devices.

Once inside, I observed that, other than me, there was only one lady and her elderly mother that were not on a cellphone.  The Disengaged allow their children to behave unsafely simply because they're not aware.  What struck me is that the conversations I overheard (not hard to do when people are shouting) were all negative.  Every one of those calls was someone complaining about a person they had in common with the ear on the other end of the technology.  Not one call was, “Baby, they don’t have the brand you want here.  Would you like something else?”  No calls pertained to shopping unless it was a complaint about the store.

The Disengaged don’t smile at another person while shopping.  They are not polite in any way.  The Disengaged don’t even hang up while cashing out, causing the lines to be longer because they cannot focus while they pay the cashier.  All the while, they complain to their listener about how slow the checkout line is.  Really?  ENGAGE YOURSELF!!!

Think of the low wage that cashier is making to not even receive a polite “hello” out of you.  Can you do anything without your phone?  Let’s face it, grocery shopping is a necessary evil that no one really likes to do.  So, why not leave your phone tucked away for the few minutes it takes you to do it, and share a smile with someone who also doesn’t want to be there.  Believe me when I say that it actually makes the experience better for both when I do.  When engaging with someone else who is nearby, think of it as camaraderie.  “We’re in the trenches together.  Let’s make the best of it.”

So as you head into your serious Christmas shopping, challenge yourself to put your phone away, observe all that is around you.  Let at least one other person make eye contact with you...and smile.

*Unfortunance: n, The act of being subjected to a troublesome situation.